2022 was in many ways an unusual and challenging year. Some of the most important issues were the Russian invasion of Ukraine, the highest inflation levels for more than 40 years and not least central banks’ reaction to inflation performance. In the course of 2022, the Fed as well as the ECB realised that inflation was maybe not as temporary a phenomenon as first assumed, which led to a considerable tightening of the monetary policy. In 2022, the Fed hiked its interest rate from 0.25% to 4.50% whereas the ECB hiked its interest rate from -0.50% to 1.50%. In a historical perspective, comprehensive fiscal-policy tightening which has very much left its negative mark on consumer confidence, but also on the sentiment in the financial markets. Therefore, 2022 offered extreme fluctuations for both equities, commodities, interest rates and currency.

The general equity markets dropped back for most of the year – yet interrupted by several periods of large increases. For Danish investors in global equities a strengthening of the dollar of more than 6% against Danish kroner offset part of the price decline but far from sufficient to avoid negative returns.

Rising interest rates resulted in sharp price declines in the bond markets and negative returns. In the Western part of the world, interest rate increases were steepest at the short end of the market but the price declines were steepest for bonds with the longest time to maturity. In Denmark, a 30-year mortgage bond has for instance shed 20 points.

Like the other quarters of 2022, Q4 was dominated by large fluctuations for both equities, currency and interest rates. Once again, inflation and interest-rate hikes were dominant factors.

Figure 1: Development of equities and bonds in 2022 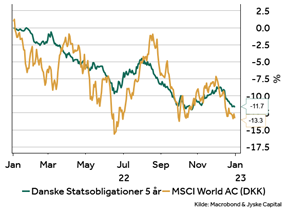