Inflation in the world’s largest economy (USA) took all economists by surprise in June. Following a setback in May, most economists believed that we had seen the top of the price increases in April. But June figures showed a new peak, and we must now go back as far as 1982 to find the same inflation level as today (see chart 1).

Chart 1: Highest US inflation in 40 years 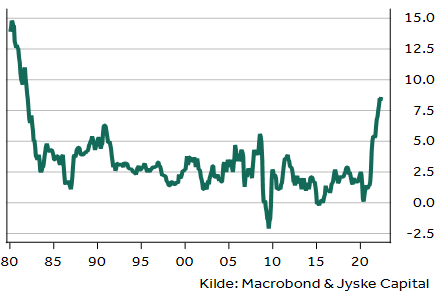 This has no doubt been one of the most important reasons why the Fed at its meeting on 15 June decided to raise its interest rates by full 75 bps whereas expectations in the early month were “merely” around 50 bps. Also the European Central Bank announced that it will have to act more aggressively (raise its interest rates) to combat the current inflationary trends in the euro zone economy. This resulted in a considerable lift in market rates in the course of June, which affected all maturities from very short to long-term interest rates. By example, several mortgage credit institutions in Denmark are now about to issue new 5% fixed-rate 30-year loans.

The interest-rate increases were too much for the equity market, and we therefore saw considerable price declines.
However, several raw materials markets experienced sharp falls in recent weeks. For instance, the market for industrial metals has declined by 15% since 6 June, and oil prices have dropped back from USD 124 to USD 104 per barrel. This inspires hope that we may in the coming months rightfully expect that the pressure on the high inflation will be on the decline. This may cause interest rates to drop back and hence also be supportive of rising equity markets for a period of time.
In addition, the equity market has fallen back so quickly that several market sentiment indicators have shown a very fearful market. When the measurements attain these levels, it is an indication that many investors have sold equities and that additional steep price declines are much less likely. Historically, it has turned out that good returns may often be in store when the equity market is at its most fearful.

Asset class performance
A negative month across all asset classes in June. The declines in the equity markets hit across the board, and Danish equities were no exception. Rising interest rates also lead to negative returns on all interest-bearing investments. In addition, corporate bonds and emerging market bonds were hit by a widening of the credit spreads.