Even though the war in Ukraine is still raging, the effect on the financial market has been reduced recently. The market seems to be less nervous about the effect from the war, especially on energy and food supplies. In April, both government and mortgage bond yields rose further. The reason was concerns that that central banks will have to apply tougher measures to fight rising inflation, as inflation rates are still at extremely high levels. In the course of April, another two interest-rate hikes on the part of the Fed have been priced in, and now it is expected that the interest rate will be hiked 11 times (by 0.25%) in the course of 2022.

Because of the rising interest rates, investors have not been able to take shelter from falling equity prices, which would normally be the case. Hence we see two risk scenarios relating to the interest rate development from the current level.

In the event of negative surprises in relation to economic growth, central banks will become less aggressive to avoid any deterioration of the economic downturn. Therefore, under this scenario, we may see falling interest rates - especially at the short end of the market.

Under the second scenario, we will not see a slowdown in the inflation performance that will suffice to make the market believe that in two or three years the central banks can achieve their target of an inflation rate of 2%-3% a year. Under this scenario, interest rates will continue to rise. In other words, growth and inflation performance will be key focal points in the months to come.

Finally, it should be mentioned that the hard lockdown of several large cities in China due to new corona outbreaks caused the economy to slow down. Hence, growth indicators from the world’s second largest economy are now at the lowest levels since March 2020 (figure 1). 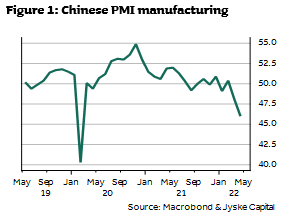 Asset class performance
April was a negative month driven by falling equity prices, widening credit spreads and rising interest rates, which constitute a bad cocktail for investments. It is a bit remarkable that emerging equity markets performed relatively well in April and, year-to-date, post lower negative returns than the developed equity markets. On the other hand, in respect of our alternative investments we have seen a decent positive return in April.

Right now
There are many good explanations why equities and bonds have fallen over the first four months of 2022, (high inflation, rising commodity prices, war in Ukraine and falling economic growth). We still think we will see high volatility over the coming period due to the high degree of uncertainty at several levels. We observe that the sentiment in the market is nearing fearful levels, which will normally, in the short term, indicate a slowdown or correction for both equities and bonds.

Consequently, prospects for the return potential for risky assets was reduced slightly at the beginning of May. Therefore, based on our indicators, we do not think that time has come to make any changes to the risk associated with our portfolios.